×
Coronavirus (COVID-19) in Salem – What visitors need to know.

Salem’s Cookin’ for the holidays (and beyond!)

Home » Blog » Learn » Salem’s Cookin’ for the holidays (and beyond!) 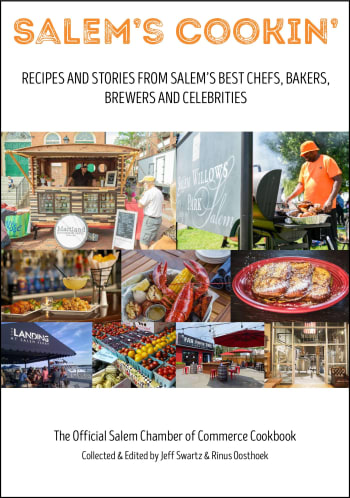 The Salem Chamber of Commerce has published its first cookbook just in time for the holidays!  Salem’s Cookin’ features a compilation of recipes from local chefs, bakers, brewers, and celebrities as well as historical context, stories, and snippets of Salem history.  There are recipes from the past and present, and chapters on beverages and cocktails as well as appetizers, entrees, and desserts.

Some of our favorite, and as yet untested, recipes include Senator Joan Lovely’s Veggie Bean Chili, Roasted Pumpkin and Apple Bisque from the Hawthorne Hotel, and Bake Chickens in Winter, which is a historic recipe that has been interpreted for the cookbook by The House of the Seven Gables.

The introduction to Salem’s Cookin’ was written by Karen Scalia, founder of Salem Food Tours. It is a love letter to the Salem’s history and its contemporary culinary scene.  Salem has, “a history worth exploring and tasting,” says Karen. And we agree!

The cookbook is dedicated to Chef Giovanni Graziani of Caffe Graziani, and Steve Nelson, Executive Chef of the Hawthorne Hotel, both of whose memory lives on in their recipes and our memories of the meals they have prepared for us.

Salem’s Cookin’ can be purchased from the Salem Chamber of Commerce, Wicked Good Books, and Pamplemousse.  Salem Spice has created a gift basket with the cookbook and ingredients to make the recipes they provided to the book, including Chipotle Honey Rub Sheet Pan Dinner.

Tune into the Destination Salem radio show on November 27 at 9:30 AM (or the podcast after!) to hear Salem Chamber director Rinus Oosthoek, assistant director Jeff Swartz, and Karen Scalia talk about how Salem’s Cookin‘!

Categorised in: Do, Learn, Plan

This website uses cookies to improve your experience. We'll assume you're ok with this, but you can opt-out if you wish. Cookie SettingsRead MoreAccept
Manage consent

This website uses cookies to improve your experience while you navigate through the website. Out of these, the cookies that are categorized as necessary are stored on your browser as they are essential for the working of basic functionalities of the website. We also use third-party cookies that help us analyze and understand how you use this website. These cookies will be stored in your browser only with your consent. You also have the option to opt-out of these cookies. But opting out of some of these cookies may affect your browsing experience.
SAVE & ACCEPT
Powered by